Walk the Other Way 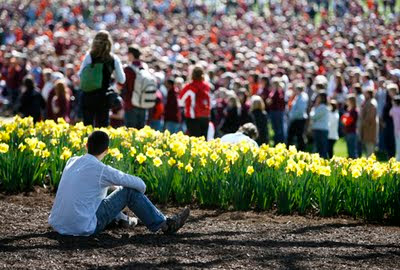 How many people you know are really happy and enjoy life to the fullest? Probably not that much.
Do these same not so happy and quite boring people give you advice? All the time.
And why would you listen? If you apply the same recipe, you'll end up with the same meal.
Each time someone gives you a piece of advice, always ask yourself how great is that person really doing in that specific field and in her life in general; especially if you didn't ask for her opinion in the first place.
Common knowledge and social norms are worth challenging and never, ever do something because "everybody is doing it" - that's the lamest excuse and an insult to your own sound judgment. It has been used to justify anything from genocides to looting and riots - even bureaucracy.
Do something because you believe it is right; not because everyone else is doing it.
Always be wary of crowd movements. When a herd moves, it generally is toward the slaughterhouse.
Blaze your own path. Walk the other way.
***
The price of being a sheep is boredom. The price of being a wolf is loneliness. Chose one or the other with great care.
Publié par Unknown à l'adresse 11:05 p.m. No comments: 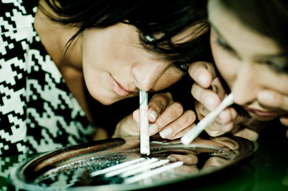 There’s no question in my mind that the dangers of cocaine have been wildly exaggerated by the antidrug lobby. Oh, I’m sure it’s not good for you, but you can certainly enjoy it recreationally, assuming you have disposable income and you hate yourself.
Unlike pot or mushrooms or liquid Vicodin, it doesn’t shift reality; it just makes reality louder, brighter, and more interested in the availability of fashionable footwear. It makes you feel like you’re walking down the street – minding your own business- and the smartest, most attractive person you’ve ever met  suddently jumps out from behind a bush and gives you a compliment. This sensation lasts between 16 and 21 minutes, after which you become singularly obsessed with finding more cocaine.
That desire  forces you to enter “cocaine culture” (at least for one night). Cocaine culture contains the worst of everything: the worst conversations, the worst friendships, and the worst kind of unspeakable joy. But the instant you’ve received a powdery compliment from this imaginary stranger, entering cocaine culture becomes the goal of your entire evening.
People who want cocaine will lie about anything; people will surrender integrity they never had to begin with. To get free cocaine, women will have sex with men they normally wouldn’t dance with. Cocaine makes you more popular, but also less likable; cocaine makes you feel guilty in advance.
When you snort cocaine, you consciously allow yourself to become foolish in the hope of seeming cool, and that’s the worst choice any smart person can make. This is why I am not a Cocaine Person, and this is why I will (probably) never become a Cocaine Person.
- Chuck Klosterman, Killing Yourself to Live
Publié par Unknown à l'adresse 11:45 p.m. No comments:

These are the things you should invest in 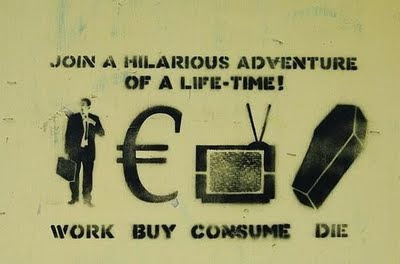 Most people buy things they don't need with money they don't have to impress people they don't like.

Not that I wish you such a misfortune, but let's imagine for a second that you lost your job, status, money and all physical possessions: house, car, clothes, accessories, etc.

What would be left? Would you still be you?

The answer lies in what cannot be taken away in such a sweep:

1. Your physical health
2. Your good memories
3. The sincere relationships you have with decent people
4. Your knowledge and skills

These are the things that truly make you YOU.

These are the things that you carry along when the rest has been taken away.

These are the things you should invest in.
Publié par Unknown à l'adresse 9:19 p.m. 2 comments:

I am not sure that Watchmen is that great of a movie, but I sure like the camera works and imagery. Oh! And the intro  to the Dylan song The Times They are a changin is awesome.

Made me wonder about alternate past and futures as Richard Bach liked to call them, but most of all about everything we forget so fast and how the little we remember is warped by the passage of time.

As Chuck Klosterman said: the strength of your memory dictates the size of your reality.

Here's a quick list of people and things buried by the sands of time. Do you have any to add?

Supermodel
We already barely remember Cindy Crawford and Elle McPherson, supermodels of the '90s; but who can remember Twiggy? Yet she was the first international supermodel and a fashion icon of the '60s and '70s.

Scientist
R. Buckminster Fuller as you certainly don't recall, was one of the greatest scientists of the 20th century. He published over 30 books, invented the geodesic dome (you can admire on in Montreal by the way - the Biosphere on île Ste-Hélène was designed by Fuller as the US building for Expo 67) and was awarded an incredible number of patents. His book Critical Path remains a must read by any serious thinker.


Car
The lavish Duesenberg was among the most popular luxury cars of the '30s as well as a status symbol in the United States and Europe, driven by the nobility, rich and famous like Clark Gable, Gary Cooper, Al Capone, Greta Garbo, Howard Hughes, Mae West as well as members of the European royalty such as the Duke of Windsor.


Book
She, published in 1887 by British novelist H. Rider Haggard is a classic of the lost world genre. It sold 83 million copies in 44 languages, that's more than Da Vinci Code and twice as much as Harry Potter. Have you read it? Take a look at the most popular books of all time.


Music Band
The Backstreet Boys were all over the place in the '90s, and where are they now? Ok, ok, I know, they are on tour with fellow '90s boys band New Kids on the Block and they're even coming to Montreal on June 7th. But hey, it's an anecdote. Back in the days, these teens sold 130 million albums! 130 million f**ing albums!! That's more than Billy Joël, Britney Spears, Bryan Adams, Depeche Mode, Guns'N'Roses, Kiss, Pavarotti, Mettalica, Phil Collins, Rod Stewart, Scorpions, Eminem, The Doors, Iron Maiden, Prince, Van Halen, Bob Dylan, Coldplay, Duran Duran, Lady Gaga, Motleÿ Crüe, Oasis, Nirvana, Pearl Jam or REM...

Airport
50 years ago, Gander Airport in Newfoundland was the busiest airport in the world and was lavishly renovated in 1959 to be Canada's flagship airport and impress the rest of the planet. Today, it sees only cargo and local flights. See my previous post The Forgotten Airport

Sea
The mighty Aral Sea in Central Asia was once the 4th largest lake in the world. In the 1960's the soviets decided to divert its waters to grow cotton and cereals in the desert. Today, it lost 90% of its surface while its salinity increased exponentially. The surrounding landscape is littered with dying land and rusting ships clouded in dust storms.

Billionaire
Andrew Carnegie was a steel magnate who dominated the US business world of the late 19th and early 20th century. Technically, he was not a billionaire, but his fortune evaluated at $485 millions would be the equivalent of roughly $300 billions in today's money. A Scottish immigrant who started from scratch, Carnegie rose to success through his intelligence and hard work. At a very young age, he decided that he would spend half his life amassing wealth, and the other half giving it all away. And he did! Those having read Napoleon Hill's Think & Grow Rich will remember him talking profusely about the old Scott. He is also mentioned by Jim Rohn in his book Living and Exceptional Life, but the vast majority of the world has no idea who he was.

Actress
Ursula Andress was the first Bond Girl. She played alongside Sean Connery in the iconic Dr. No (1962). Although Jean-Paul Belmondo is one of my favorite actors, I must admit I am quite jealous of the sabbatical he took to sail around the world with the beautiful Swiss actress and her famous white bikini.

Author & Journalist
Joseph Kessel was probably the most influential writer and journalist of the French speaking World during the 20th century. The guy was everywhere: The Irish Civil war, WWI, with the artists of L'entre deux guerres in Montmartre, the Bolshevik tide and the fall of the tzars, the rise of Hitler, the Spanish Civil War, WWII, the French Résistance, and any significant event of the 20th century. Hell, he even managed to get the 1st visa ever issued by the newly formed state of Israel. Yes, he was first there too. He was elected at the prestigious French Académie Française and published over 80 books. At one point in time, he had met everyone that mattered and rubbed elbows with the stars, royalty, spies, army officers, artists, chefs and of course, renegades, mobsters and outlaws. Personally, I consider his classic Tous n'étaient pas des anges one of the best adventure books of all time. Yet, try to find any of his work in bookstores today. Good luck.

Airline
Pan Am (Pan American World Airways) once was a cultural icon of the 20th century and the unofficial flag carrier of the United States. It went bust in 1991. 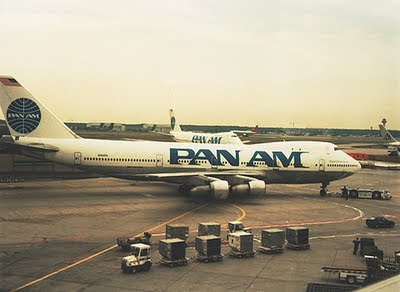 And there are thousand other kings, queens, cities, cultures, civilization, languages, empires and conquerors once believed to be eternal and whose names are now forgotten.

I met a traveller from an antique land
Who said: "Two vast and trunkless legs of stone
Stand in the desert. Near them on the sand,
Half sunk, a shattered visage lies, whose frown
And wrinkled lip and sneer of cold command
Tell that its sculptor well those passions read
Which yet survive, stamped on these lifeless things,
The hand that mocked them and the heart that fed.
And on the pedestal these words appear:
`My name is Ozymandias, King of Kings:
Look on my works, ye mighty, and despair!'
Nothing beside remains. Round the decay
Of that colossal wreck, boundless and bare,
The lone and level sands stretch far away".

- Percy Bysshe Shelley (and it was quoted in Dead Poets Society, another forgotten movie).

It has been said that we are alive as long as other people remember and tell our stories.

What about you? Who will remember you?
Publié par Unknown à l'adresse 10:27 p.m. 1 comment:

Reverse Thinking on the Stolen Day 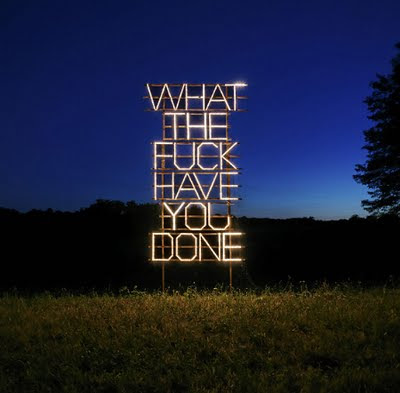 Let's say that instead of having a normal day today, you just didn't wake up this morning and slept until tomorrow morning. Or that some kind of Adjustment Bureau folks just erased the whole day.

Ultimately, what kind of a difference would that unique stolen day make in your whole life? After all, if you live to be 80 years old, that makes a total of 29 220 days.

I think this one should be analyzed in reverse.

If removing a single day from your life doesn't make a difference, then you're not living intensely enough.

Life is just that: a sum of individual days.

If every day is awesome, it is impossible to have a bad life.